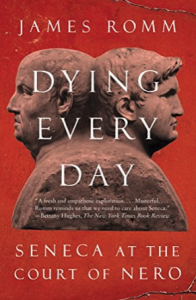 Dying Every Day: Seneca at the Court of Nero by James S. Romm

If you have read Ryan Holiday’s books — including Ego is the Enemy, The Obstacle is the Way, or The Daily Stoic — and think you have a decent understanding of Seneca, you are wrong.

You think you know Seneca? If you haven’t read this book, you don’t know Seneca.

Dying Every Day is the story of Seneca’s life and the circumstances in which he wrote his greatest works of fiction and philosophy.

In his time, Seneca was known as a shrewd political insider — much like a Karl Rove or David Axelrod of his day. As the tutor of the young Emporer Nero, he either knew about and may have played an active role in Nero’s murder of his brother, Brittancus, and mother, Agrippina, herself an amazing political power broker.

Many of his works were designed to be political propaganda, and only at the end, when the alligator he fed eventually came to eat him, did he seem to recant and wish to have led a more ascetic life.

Did Seneca know he wasn’t living his life in accordance to his principles? Is that why he chose to write such enduring works of Stoic philosophy?

I look forward to seeing what Ryan Holiday has to say on this in his upcoming book: Lives of the Stoics which will be released on September 29th. 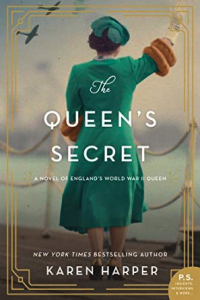 This book is a fictionalized account of the amazing role Elizabeth Bowes-Lyon (a.k.a. “The Queen Mother”) played as the Queen of England during World War II.

There are many “ripped from the headlines” scenes including Edward VII’s abdication, her husband’s George V’s coronation, many meetings with Winston Churchill, the bombing of London and young Princess Elizabeth’s first meeting of Prince Phillip. Hitler even called the Queen “The most dangerous woman in Europe.”

However, in this fictionalized account, the Queen harbors some very deep, dark secrets that pertain to Edward VII and Wallis Simpson.

All that should make for a very dramatic, very exciting story. However, the author’s constant repetition of Elizabeth’s internal monologue about having these secrets was just offputting. It seemed as if every other page the reader is reminded that Elizabeth has some secrets, and eventually she’ll let you in on them, rather than alluding to such secrets and letting the story unfold.

If you like WWII England historical fiction, it’s worth a shot. If I had it to do over, I’d take a pass.